From Our Vet Room: Raising Awareness for Rare Disease Day

The 28th of February this year marks Rare Disease Day, a day for raising awareness and generating change for the 300 million people worldwide living with a rare disease, their families and carers. Although this day importantly focuses on the non-furry individuals who are affected by rare disease, we wished to raise awareness for this significant day by sharing the story of one of our animal friends with a rare disease that has no voice to do so themselves.

Here at The Cat & Rabbit Rescue Centre, we support many animals with disease and on occasion, a few surprise even the very educated and experienced like our Vet Nurse, Sophie and the Vet, with a rare disease.

Meet Stormy, a gorgeous tabby boy that arrived at The Cat & Rabbit Rescue Centre on the 18th of August 2017. Stormy was one of 20 cats in a home that he was surrendered from due to the previous owners not being able to cope with such a large number of cats. Although the change in his surroundings must have been quite a surprise for him, he had the company of his sister, Bubbles, by his side whilst he stayed with us. As the pair hadn’t been handled much as young kittens, they were both quite shy. However, our Animal Care Team soon noticed something much more unusual and concerning than his shyness. Stormy was drinking an abnormally large amount of water very frequently, which greatly exceeded what you may expect from just a thirsty cat or even from experiencing dehydration brought upon by a cat’s previous living conditions. Stormy was also urinating excessively and filling up whole litter trays with what looked like just plain water. To find out what was affecting Stormy’s drinking habits, Sophie and the Vet carried out ultrasounds, urine tests, blood tests, gave medication, and regular medical checks. After working tirelessly to get to the bottom of what was going on, we could finally give Stormy his diagnosis; Diabetes Insipidus. Unlike what many of us may think of when we hear the term diabetes, Diabetes Insipidus does not actually have anything to do with abnormal blood glucose levels, but affects the body’s ability to conserve water, thereby releasing too much of it, which was the obvious cause of why Stormy was urinating so much and drinking so much to replenish the lost fluid. In humans, Diabetes Insipidus is commonly treated with a nasal spray medication, however with his shyness, it was determined Stormy would cope better at taking the medication via eye drops. Despite his diagnosis, he showed improvement with the help of daily medication Sophie and our Animal Care Team administered and he was eventually doing well enough 6 months later to be welcomed to his forever home by his now owner, Courtney. 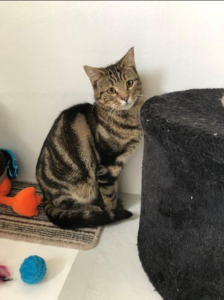 Courtney shares that she first met Stormy and his sister when she attended an open day in March 2018. She tells of her visit to The Cat & Rabbit Rescue Centre and how Stormy got on in his new home.

“His details described that Stormy was a part foster for the medical condition diabetes insipidus, which I had never heard of before, but after getting more information from staff about this lifelong condition it didn’t seem so daunting. Cats with health issues often get overlook but I always look for animals that need a little extra TLC. It took Stormy a good year to settle into the home as he was frightened of everything, so his eye drops in the evening did prove challenging, but with time and patience he came out of his shell and is more confident, relaxed, and chatty. Living with his disease so far has been under control, as long as he has enough access to water bowls (or buckets for outside, he has his favourites), gets his eye drop done every evening which is provided by The Cat & Rabbit Rescue Centre every month, and 6 monthly checks to our vet to make sure all is okay. He is such a handsome boy who has grown so much alongside his sister and I wouldn’t change him; I love him just the way he is.” 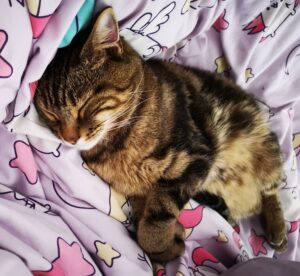 Nearly 4 and a half years since we first met Stormy, he’s doing well and is enjoying his time in the loving home Courtney has given him and his sister. We provide Stormy’s medication through our part foster scheme, which means we cover the hefty cost of medication related to his rare disease, which Courtney picks up regularly from The Cat & Rabbit Rescue Centre. We always enjoy hearing about how Stormy is doing and we enjoy seeing him when he comes in for his regular check-ups with Sophie and the Vet.